How is a decaf coffee bean made

The best part of waking up is no caffeine in your cup. Wait.. what? that’s no fun.

Hey everyone Julia here for DNews

I need my caffeine in the morning. i’m a total zombie without it. And so are millions

of other Americans. Nearly 83% of the population drinks coffee, according to the National Coffee

Another survey by Zagat found that most people drink 2.1 cups a day. And that’s not a bad

thing. Some studies show that coffee can boost your focus and even help prevent diabetes

and lower the risk of liver disease. But for some the caffeine leaves them anxious and

But maybe those people still like the taste but not the perks, so for them, decaf is the

way to go. But how do you decaffeinate coffee? Big shout out to our viewer Jasper Lithgow

for asking this very good question.

Caffeine occurs naturally in some plants, like the cocoa tree, Coffea plants, and Camellia

sinensis from which tea is made. Like I said, naturally, so any decaffeinating process is

The first decaffeination process was really unnatural. it was even a little dangerous.

out of his coffee beans while they shipped across the ocean. And for some reason he thought

this was a totally good idea.

So he tried to recreate it by steaming the beans and using a solvent to remove the caffeine.

carcinogen and can cause some serious discomfort like, stomach pain, dizziness and even death.

So yeah that’s not good.

While benzene is no longer used, other chemicals are still used to remove caffeine. The process

is a little complicated. Beans are first soaked in water, which opens the pores in the bean

so the caffeine dissolves. But so does some of the flavor. This water then gets treated

with a solvent, typically dichloromethane and ethyl acetate, for about ten hours. This

separates the caffeine from the flavors. Finally the mix gets heated to evaporate the solvents

and the caffeine. This treated water gets returned to the bean so they can re-soak up

“naturally decaffeinated”. I know, i know, it doesn’t sound completely naturally. But

one of the solvents, ethyl acetate pretty natural, it’s found in a lot of fruits.

Unfortunately it’s difficult to extract, so most manufacturers use a synthetic version.

Another process gets a little fancier. The Swiss Water Process relies on simple concepts

like osmosis and solubility to remove the caffeine. Using water from mountains in british

columbia, the beans are bathed in really hot water to draw out the caffeine. which is then

good things you’d want to stay in the bean like the flavor. So then that water is then

returned to the beans to put the flavor back.

But these are “indirect” ways of removing caffeine, the solvents never touch the beans!

A more direct way uses CO2. After the beans are soaked in water, they’re placed in a

stainless steel container called an extraction vessel. Liquid CO2 is then forced into the

beans at enormous pressure. At 1,000 pounds per square inch! The CO2 draws out the caffeine

but leaves flavors behind.

That’s so weird and science fiction-y. While decaf might seem weird, and kind of

pointless… some studies show it still retains some of the health benefits!

I mean decaf still has caffeine. One study published in the Journal of Analytical Toxicology

found that most major brands have around 8.6 milligrams to 13.9 milligrams of caffeine.

Compared to a normal cup which has around 85 milligrams.

help the way the brain metabolizes energy. It could also prove useful for helping prevent

and treat decline from diabetes or aging.

No matter your coffee style, there’s no doubt caffeine can pack a punch. Trace explains

exactly what caffeine does you in this video here.

How much coffee do you drink? Would you do decaf? Let us know in the comments below.

Or if you have any other questions about the science of food, leave those too! We could

answer them in a future episode. 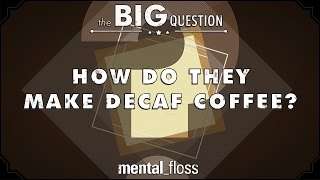 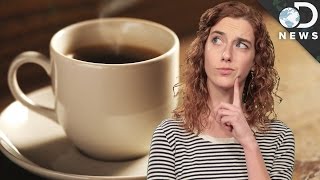 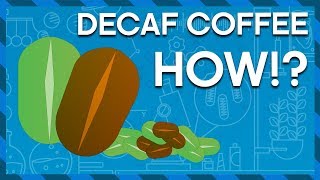 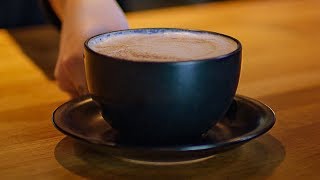 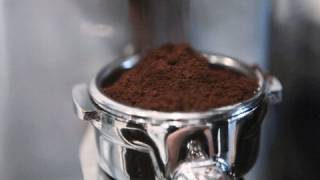 What Is Decaffeinated Coffee? | Perfect Coffee 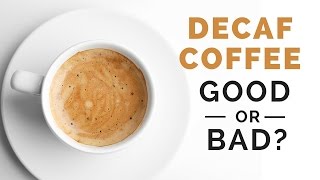 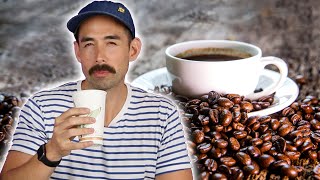 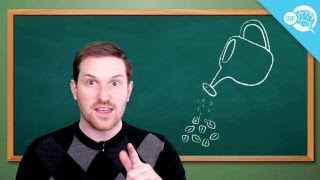 How Do You Decaffeinate Coffee and Tea? 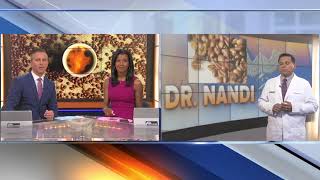 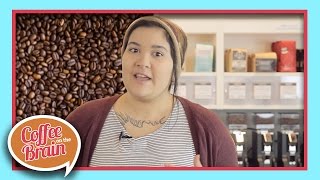 How Do They Decaffeinate Coffee? | Coffee On The Brain