There are four types of chemical bonds essential for life to exist: Ionic Bonds, Covalent Bonds,

All of these bonds represent an emergent property of atoms.

Individually, we can study the makeup of atoms - how many protons, neutrons,

and electrons they have.

But when atoms come in to close proximity with each other, a new characteristic becomes apparent.

If an atom doesn’t have a filled valence shell of electrons, it can either share electrons

with another atom, or it can completely transfer electrons.

This way, an atom can gain enough electrons to fill its outermost shell, or shed enough

electrons to empty its outermost shell, leaving a complete valence shell underneath at the

The interactions between atoms that take place as a result are called chemical bonds.

So this is an example of an emergent property.

contact with another atom - then the chemical behavior EMERGES.

One thing that determines what kind of bond an atom will be involved in is its Electronegativity.

and holds it close.

If two atoms come together and they have fairly similar electronegativities, they will share

an electron between the two of them.

This especially makes sense when the two atoms are identical.

Neither one has a complete valence shell of electrons.

The outermost valence shell in oxygen has 6 electrons.

So it needs two electrons to fill up that valence shell and become more stable.

When two oxygen atoms come into close proximity, they can share two electrons and so form a

They have the same electronegativity, since they’re identical, so the electrons are

equally shared between the atoms.

We call this a NONPOLAR COVALENT BOND.

Now, if there IS a difference in the electronegativities, the electrons will spend a greater amount

of time next to the atom with a higher Electronegativity.

Remember, electrons are always in motion, moving around in kind of cloudlike regions

For instance, in a water molecule, H2O,Oxygen has a higher electronegativity than Hydrogen.

So in both of the bonds in this molecule, the electrons will spend a greater part of

their time closer to the oxygen atom versus next to the hydrogen atoms.

atom, and a partial positive charge around the hydrogen atoms.

We call this kind of chemical interaction a POLAR COVALENT BOND.

Now if the electronegativities are different enough, one atom will actually donate one

The atom that donates one or more electrons is called a cation.

The atom that takes on electrons becomes negatively charged.

This is called an anion.

As a result of becoming oppositely charged, these ions are now attracted to each other

That attraction holding the two ions together is called an IONIC BOND.

Now here’s a funny thing about ionic bonds in biology.

When you learn about ionic bonds in chemistry, like say, the bonds holding the salt NaCl

together, we think of it as quite a strong bond.

But in biology/ biochemistry, you must remember that everything - all these chemical interactions

- are taking place in the context of water.

So for this reason, in biochemistry, we consider ionic bonds weaker than most covalent bonds.

In chemistry, we always discuss the range of strengths of the bonds.

This may surprise you, but it’s really important that we have the capability to make bonds

There are some cases where we want very strong bonds.

But there are other cases where it makes more sense to have weak bonds.

Bonds that can be used for REVERSIBLE interactions.

Let’s say we have a receptor, and a signalling molecule that binds it - like a hormone or

We don’t want that signalling molecule to bind to the receptor once, and get stuck there,

We want it to bind REVERSIBLY - to bind, send the signal, and then fall off.

In fact, there are some poisons that work this way - they bind permanently to a receptor

and don’t fall off, so they mess up signalling in your body.

The next weaker bond is the Hydrogen bond.

of a hydrogen bond is in water.

We use that example because it’s incredibly important for why water is essential to life...and

that’s a topic for another video.

But meanwhile, the confusion comes because we just said there are polar covalent bonds

In INDIVIDUAL water molecules, those bonds are polar covalent bonds.

There are hydrogen bonds that hold different water molecules together.

This is what makes water so cohesive.

For example, why water forms drops that kind of bunch up instead of lying flat.

else that is partially negative.

This is usually an oxygen, nitrogen, or fluorine atom that is bonded to something else.

So in the case of water, you have the hydrogen from one water molecule attracted to the oxygen

in a DIFFERENT water molecule.

Notice that these bonds are written differently from covalent bonds.

Rather than a solid line joining the two atoms, it’s a dotted line.

That’s to remind you that this is a very weak interaction.

These bonds sort of blink on and off.

To understand these, you must keep in mind that idea that electrons are

They occupy an orbital, which a cloud, or a region, around their atom’s nucleus.

You can’t pinpoint exactly where it is going to be at any one moment, but you have an idea

of this region where you can find it with high probability.

That receptor and signalling molecule we mentioned earlier.

Some of the time, there will be a temporary uneven distribution of electrons, which results

The opposite regions of the receptor and binding partner will line up, and briefly be attached

And then in the next instant, they are released.

lights, except now even faster.

Here’s a challenge for you.

For each one of these kinds of bonds, give us an example of it playing an important role

Write your answers in the comments!

This is a good strategy to adopt as you go forward in biochemistry.

If you can keep an example molecule in mind, that can help

So - this is what a hydrogen bond looks like.

You won’t get so easily confused later on. 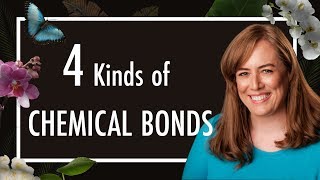 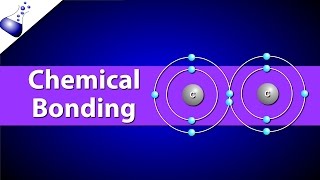 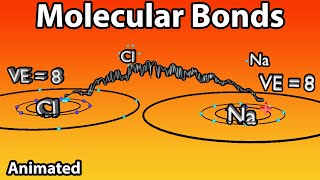 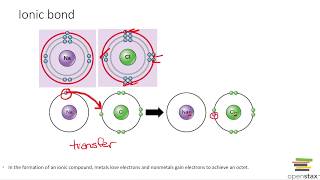 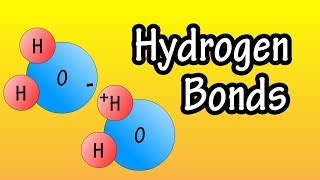 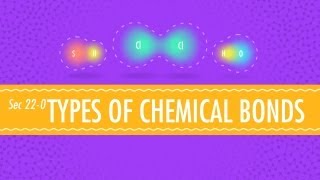 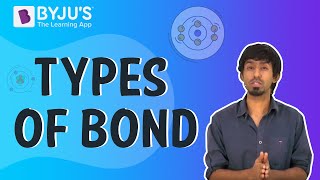 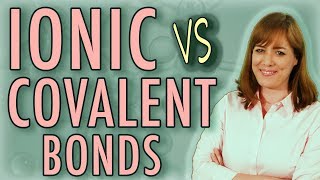 Chemistry: Ionic Bonds vs Covalent Bonds (Which is STRONGER?) 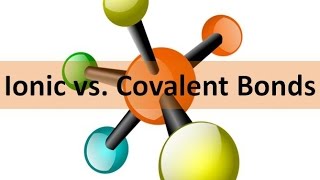 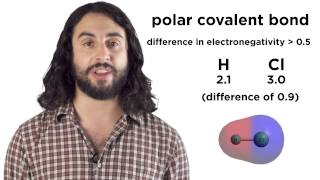