How is a fair wage determined

Adriene: Unless you're independently wealthy, or fine with living in your parents basement,

you probably need to get a job. But how do you even get a job? And what kind of job should you get?

In a lot of ways, it comes down to supplying a skill that someone else demands.

This is Cristiano Ronaldo. He makes about $20 million a year playing soccer. Or football,

depending on where you live. Pretty much everybody would agree no one NEEDS that kind of money,

but does he deserve it? How do his employers, the Real Madrid Football Club, justify this huge salary?

Admittedly, the market for professional athletes is complex, but on some level, it’s supply and demand.

The supply of people that have the skills to be world class soccer players is low.

And the demand for world class soccer players is incredibly high.

Ronaldo might be willing to play for only 10 million dollars a year; it’s a lot of money.

He might even play for 5 million. And if he really truly loved the beautiful game,

he might do it for free. So why is he getting 20 million dollars?

This goes back to that really high demand. Having a superstar on your team generates

millions in ticket and merchandise sales. It might help you win some of the many cups

up for grabs in international football. So Real Madrid thought Ronaldo and his double

scissor move, were worth 20 million dollars, and Ronaldo agreed, so they have a contract.

These same ideas explain how wages are determined in nearly every labor market. Let’s go the Thought Bubble.

Jacob: Usually when Stan goes to the mall he's the buyer. He demands sunglasses and

giant pretzels and the businesses supply them.

But if he wants a job at the mall’s pretzel shop, the roles are reversed. Since he supplies

labor, he is now the seller and the pretzel shop owner becomes the buyer. A buyer of labor.

Stan could insist on a wage of $25 an hour for his pretzel skills, but the owner would

point out that they could easily hire other people for much less. The owner could offer

Stan a wage of only $1 per hour, but Stan would point out that he could easily get paid more at the Froyo shop.

In the end, they agree on a wage that makes each of them better off. The owner gets some

help around the store and Stan earns money so he can buy even cooler sunglasses.

The supply of labor depends on the number of people that are qualified to do the job.

Stan would love to get paid more, but since warming up pretzels doesn’t require extensive

skills, the supply of capable workers is high and consequently the wage is relatively low.

But that doesn’t mean that Stan is going to work for peanuts.

The wage offered has to cover his opportunity cost --

-- the value of his lost free time and the money he could be making doing something else.

Economists call this derived demand. If pretzel demand is booming, then the store owners are

workers will increase and drive up wages.

Thanks Thought Bubble. Supply and demand explains why wages are different for different professions.

and their supply is limited because the training for these jobs is pretty difficult.

Social workers and historians, aren’t paid as much, even though their work is important

Adriene: Supply and demand explain a lot, but there are several reasons why wages in

a labor market don’t end up at a competitive equilibrium. Sometimes workers get paid less

not because they have different skill levels, but because of their race, ethnic origin,

sex, age, or other characteristics. This is called wage discrimination.

one company hiring and workers are relatively immobile. When you’re the only employer,

workers have to take what you offer, or they’re out of luck.

Take the NCAA, the organization that regulates college athletics in the US.

schools, but they’re forced to accept a very low “wage” of a scholarship with free tuition.

Now sure, baseball and hockey players can skip straight to the pros, but the NFL prohibits

There are some situations where wages might actually be higher than market equilibrium.

For example, some employers might voluntarily offer higher than normal wages to increase

jobs elsewhere. And this still goes on today. You may not be completely happy with

your job, but if it offers way more than what everyone else is paying, you're less likely to quit.

Unions can also drive up wages. A union is an organization that advances the collective

interest of employees and strives to improve working conditions and increase wages.

They do this through collective bargaining.

Representatives for the workers negotiate with employers and if their demands aren’t met,

workers go on strike, and stop production altogether. Although unions were once very

strong in the US, union membership and their strength has declined since the 1950s.

At their height, approximately 1 in 3 American workers were in a labor union. These days it's more like 1 in 9,

and the largest unions represent workers in the public sector, like teachers and firefighters.

floor that prevents employers from paying workers below a specific amount.

Technically, in the US, minimum wage affects less than 3% of workers.

just impact that small slice of the labor market. It would also drive up the wages of

people who make just above the minimum wage. According to Brookings, that ripple effect

could raise the wages of nearly 30% of the workforce.

The debate over whether or not there should be a minimum wage, and how high that minimum

wage should be, gets pretty heated pretty fast.

Some classical economists argue against nearly all forms of government manipulation in competitive markets.

They say the minimum wage not only leads to unemployment, but it actually hurts the people it claims to help.

Their logic goes something like this: A minimum wage deters employers from hiring unskilled workers,

hiring only skilled or semi-skilled workers instead. These economists argue that minimum wage

does little or nothing to alleviate poverty, since instead of earning a minimum wage, unskilled

workers end up earning no wage at all.

or transparent as classical economists suggest. They believe that employers have the upper hand

when it comes to negotiating wages and that individual workers lack bargaining power.

I’m not going to tell you what to think, but think about it like this: if a grocery

store wasn’t required to pay $7.25 an hour, and the grocery store was the only place hiring,

they could likely squeeze individual employees to accepting lower than market value. In this interpretation,

minimum wage isn’t interfering with competitive markets, as much as it’s correcting a market failure.

that support minimum wage laws say they prevent employers from using their power to exploit workers.

The economists who are entirely opposed to minimum wage laws are losing the policy battle.

Most countries around the world have minimum wage laws, and many of those countries without

But even among economists who support some sort of minimum wage, there’s disagreement

7 Nobel Prize winners signed a letter arguing that the minimum wage should be increased to $10.10 an hour.

They argued that raising the minimum wage could have a small benefit to the economy.

Workers, with their newly increased wages, would spend more. This would increase demand,

wage might make sense in an expensive city, like Los Angeles or New York, where the median

income is relatively high, it could have a significant negative effect on employment

in a city or town where incomes are lower.

If economics was a pure science, we could just test these ideas under controlled circumstances.

We could have one state set a significantly higher minimum wage than its neighbor and see what happens.

It turns out that happened in 1992, and economists David Card and Alan Krueger studied it.

and found that workers didn’t get fired, in fact, employment in New Jersey actually increased.

But it’s far from settled. There have also been studies that indicate raising the minimum

wage DOES increase unemployment. A relatively recent survey of economists, by the University

of Chicago, found that a small majority think raising the minimum wage to nine dollars an

hour would make it noticeably harder for poor people to get work.

But, and this is where it gets interesting, a slim majority also thought the increase

would be worthwhile, because the benefits to people who could find jobs at nine dollars

an hour would outweigh the negative effect on overall employment.

that it could reduce poverty. The minimum wage doesn’t exist in vacuum. Policies that

fight poverty should also focus on providing education and skills.

Adriene: Those skills are what the labor market values. It’s those skills that are in short

supply and high demand, and will command higher wages. So, while you’re waiting for economists

to figure all this out, you might want to learn a new skill. Practice your double scissor,

Jacob: Thanks for watching Crash Course Economics, which is made with the help of all these awesome people.

You can help keep Crash Course free for everyone forever by supporting the show at Patreon.

Patreon is a voluntary subscription service where you can help support the show by giving a monthly contribution.

Thanks for watching! DFTBA! 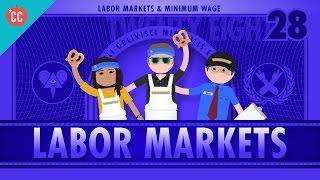 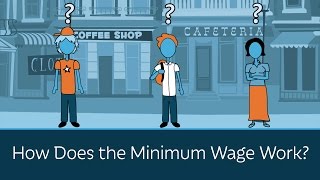 How Does the Minimum Wage Work? 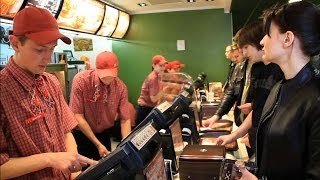 What quality of life can minimum wage workers afford? 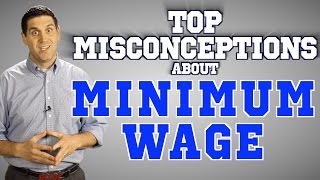 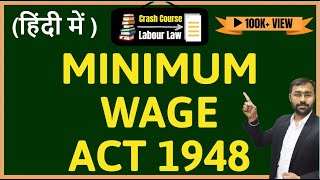 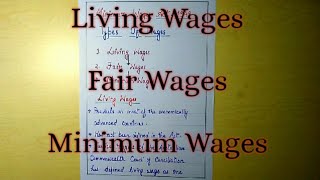 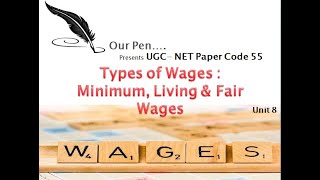 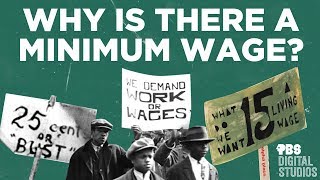 Why Is There a Minimum Wage? 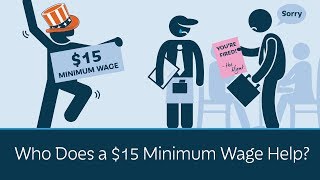 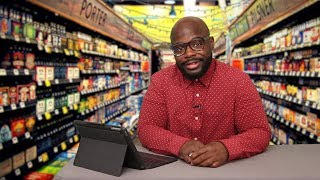