How is a drug dog trained

(with one caveat that we’ll get too shortly).

As it turns out, though, how these crime-fighting pooches are typically trained is a very simple

process anyone can do with a bit of persistence and patience.

Obviously the first thing you need to train a sniffer dog is, well, a dog.

While any dog can be trained to sniff for drugs or illegal material, some have a better

sense of smell than others.

and beagles, all of whom have an impressive sense of smell even by dog standards thanks

to generations of selective breeding.

Once a suitable dog is selected, training it to sniff out the desired substance is a

simple matter of getting the dog to associate a favourite toy with its smell.

One popular toy chosen by sniffer dog trainers is a small white towel, which is easily recognised

by the dog, can be cleaned to ensure the towel’s scent is minimized, and in the general case

dogs love a good game of tug of war with said towels.

After the dog learns to associate the toy with getting to have fun, the trainers begin

seek out, be it drugs, chemicals used to make bombs, money, or really whatever.

to sniff out hidden memory cards, hard drives, and other such devices.

Fogle, when the dog found just such a hidden flash drive at Fogle’s residence that human

In a nutshell, if the item has a scent, the dogs can be trained to sniff it out.

As you might have gathered from this, over time, the dog will learn to seek out whatever

smell, not for the smell’s sake (as has been often erroneously suggested by those

insinuating the dogs are addicted to the drugs), but rather because they associate finding

the source of the smell with their favorite toy and play time.

And if you’re wondering here, yes, the drug sniffing dogs are technically trained via

using actual drugs, though the amount needed here for the dogs to pick up the scent is

incredibly low thanks to their exceptional sense of smell.

This ensures no risk to the dog themselves, at least in training.

The same cannot always be said to be the case when the dog is on duty.

likely barriers between the drug and the dog), it does sometimes happen where the dog may

be exposed to something so toxic that even trace amounts pose a risk to them, such as

relatively recently happened in Broward County, Florida where sniffer dogs were exposed to

To get around this problem, the dog’s handler will keep a vigilant watch and particularly

not deploy sniffing dogs at all if there are any loose drugs present.

For the unseen drugs that nonetheless may be particularly potent, the handler also might

carry things like naloxone with them, which rapidly reverses/blocks the effects of opioids,

Back to training- once the dog has learned to successfully seek out the smell when commanded,

action when it finds the source.

For example, some drug sniffer dogs are trained to paw at the spot where the illegal substance

is located, but this, obviously, isn’t ideal if the dog is searching for something like

As a result, sniffer dogs are trained to have “passive” and “aggressive” responses

based on the situation.

The passive response can, again, be whatever you like, though most sniffer dogs are trained

to simply sit down and/or point with their nose and freeze in these cases.

As one security company who trains sniffer dogs summarizes:

During the early stages of training, the sniffer dog will receive a reward when it displays

any form of recognition of the target scent.

As the dog’s skills progress, the reward will only be given when the dog responds with

With these quite simple training methods, the resulting sniffer dogs are very accurate

being fooled by strategic placement of treats or other masking scents like meats.

This all said, in real world use, there does seem to be a major issue given dogs have also

This is essentially another example of the Clever Hans Effect.

If you’re unfamiliar, this was a phenomenon famously observed in a horse named Hans who

genuinely seemed to be able to do math, including fractions, multiplication, and even square

roots, as well as eventually learned to spell out names, among other remarkable skills.

In the beginning this was widely assumed to be a hoax, but after an independent commission

confirmed the horse really could do these things, it seemed as if mankind had been massively

underestimating the intelligence of horses.

That is, until psychologist Oskar Pfungst ran a series of experiments that uncovered

know the answer, the horse universally got the answer wrong.

horse had remarkable accuracy in the 80%-90% range in many tests.

Thus, what was actually happening was the horse was simply reading very subtle body

(You can read more on this here: The Horse That Could Do Math)

As you might imagine, sniffer dogs suffer from this same phenomenon.

Cognition in which the dogs were tested in a scenario where there were no drugs, but

the dog handlers and those observing the handlers were told there were drugs.

To further attempt to trick the dogs themselves, certain food/play items were also placed about

The dogs performed well with regards to ignoring the treats, but were nonetheless uncharacteristically

wildly inaccurate anyway, particularly around areas where the humans were led to believe

As there were no drugs, the result was simply a whopping 225 false positives by the dogs

In fact, in only 15% of the total 144 runs did a dog and its handler successfully go

through the course without indicating they’d found drugs.

inaccurate when the handlers are fooled, it’s generally thought it’s really the humans

that are the problem here, not the dogs.

On this note, there have been lawsuits in the United States alleging that some handlers

the police can then conduct an otherwise illegal search any time they please.

In support of this notion, despite in testing the dogs being extremely accurate, one report

stops in the suburbs around Chicago reported false positives a whopping 56% of the time.

More disturbingly, that false positive rate rose to 73% when the police had pulled over

someone of Hispanic descent.

(Although it should also be noted that despite a three year span, the sample-set the Tribune

and the data they used was also incomplete.)

That said, during the previously mentioned study published in Animal Cognition, the experimenter

the handler thought there was drugs, implying that this is something at least some handlers

have trained their dogs to do when the handler thinks drugs are present.

Nevertheless, while some handlers seem to be doing this, it’s generally thought that

of drugs from past drug presence (potentially even from years previous) or, perhaps even

more likely, simply another instance of the aforementioned Clever Hans Effect, in that

The dogs then pick up on this, and so even though the dogs may not yet be smelling drugs,

they react as if they do, resulting in a disproportionate number of false positives in these cases,

and potentially a bit of racial profiling thanks to the humans’ biases, rather than

the dogs not being good at their job.

present in the distant past.

Despite this, to date, this doesn’t appear to be something implemented in any sniffer

dog training program we could find.

But in the end, the important thing to note in all of this is that sniffer dogs generally

see their work as a game and usually work hand in hand with their best friend, sometimes

for years with the same handler.

And regardless of how accurate they are in any given scenario, each and every one of

them is a very, very good dog.

ognoscente of the profiling problem and potential for

infringing searches where no such search is warranted by what the dogs are actually smelling,

a new tack has been investigated by some agencies

in the form of switching to using mice.

While less fun to have around than man’s best friend, mice have the potential to be

more accurate than drug or bomb sniffing dogs for sniffing things out.

Another advantage of the mice, according to one security company that trains mice for

such, is that they don’t need to continually be motivated when not finding anything.

In contrast, sniffing dogs must be periodically sent on dummy missions so they don’t become

bored with the game.

For example, in airports, sniffer dog handlers sometimes have to ask employees to carry dummy

can “find” them and be rewarded.The dogs must also periodically re-trained to keep

Mice, on the other hand, are good for about four hour shifts at a time with a useful lifespan

of about 18 months, all supposedly without need to re-train or re-motivate.

Further, the mice are significantly cheaper and easier to maintain.

They also can be trained much faster and cheaper than dogs, and in extremely high numbers for

As an example of how the mice might be deployed, the aforementioned security company notes

where passengers walk by or are made to pause for a moment.

to alert for, they press a button alerting the authorities, all in a much less visible

fashion than dogs, and not prone to reacting to handler bias or, in this case, even have

a handler visible to the mice at all.

sausages instead of contraband, which while true, isn’t the whole story.

You see, the dogs in question were specifically trained to search for meat that could pose

a health hazard or was sourced illegally.

The dogs, to their credit, did find a lot of meat, it’s just that it was mostly sausages. 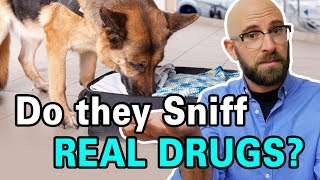 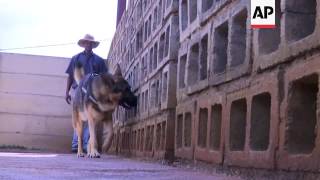 Dogs trained from puppies for sniffing out explosives and drugs 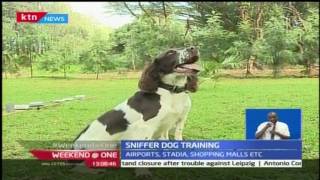 How a sniffer dog is trained to detect explosives and drugs 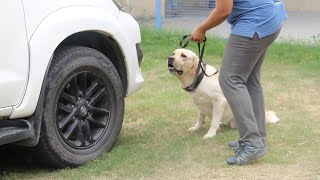 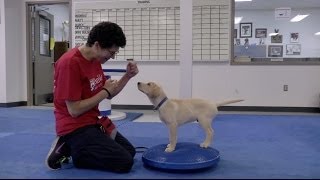 Can dogs be trained to detect the smell of cancer? 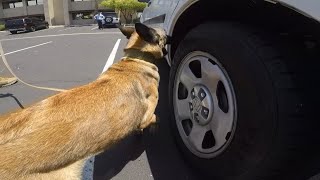 How drug-sniffing law enforcement dogs are trained in Arizona 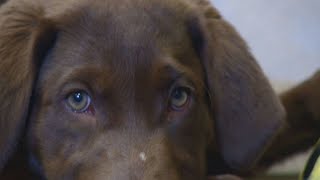 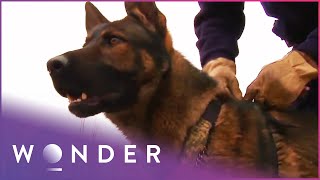 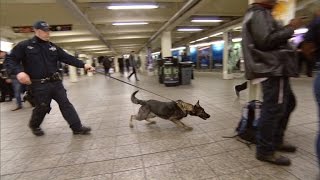 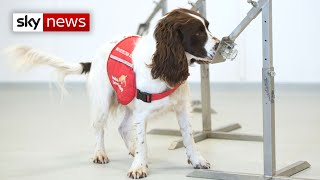